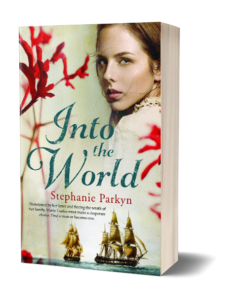 How does an idea become a book?

In How the Story Found Me and What is your Novel About? I have covered the inspirations behind the idea of the story for Into the World. Here I will outline my process of writing, finding an agent and entering the traditional publishing world.

It took me seven years to write and edit Into the World. But before that I began with another (unpublished) novel that took me four years to complete and another three years of searching for a publisher before I admitted defeat and moved on. I did things all the wrong way, but I learned.

If you are a novelist with a shiny new draft and a hankering for publication – congratulations – that’s an amazing achievement. You might like to know my mistakes. All I can say is:

And if you have always wanted to write but not yet started, I say:

Start now! It will be a far, far longer journey than you ever imagined.

But an enjoyable journey, one filled with all the exhilarating peaks and gut-churning troughs of a voyage through mountainous seas. It will be filled with rejection, and no one can tell you what that feels like until it happens to you over and over again. Like me, you may enter short story competitions, submit to literary journals, apply for grants, mentorship programmes, manuscript assessments….sometimes you will be successful and be shortlisted for a competition, or have a story published and experience that great thrill, but there will be lots and lots of rejection. It makes you feel physically sick. But there is nothing to be done about it – a necessary evil – if you are a writer who wants to put your words out into the world to communicate with others.

Of course it is easy to say, accept rejection, but for something you have spent seven years of your life working on it is a lot harder to take. More on that later.

For Into the World I had a broad idea of how I expected the story to unfold. It was based on a true story, so I picked elements of the voyage that I knew would be crucial moments of conflict or danger or emotional resonance for my main character. I had a vision of the opening scene, but I was not really sure of the end. I just started writing and read more about the history of the times as I went. At the end of two and a half years I had 140 000 words in the form of a huge lump of clay. From there I spent several more years honing and slicing and learning about what my story was actually about. I trimmed half of those words and added more, I sought feedback from friends, I revised again. It must have been upwards of ten different drafts before I got to the point where I didn’t know what to do next.

When do you send out your manuscript?

For me, I had conflicting advice from friends and family who had read the manuscript and at that stage I hadn’t yet found the small group of committed writers who would later be my critique partners (or beta readers). I cannot speak highly enough of the importance of readers who will give honest feedback, people who know what you are trying to achieve and have struggled with similar issues themselves. Often it takes time to find these crucial people. I treasure them. But in the absence of that group, I had reached a point where I couldn’t take the manuscript further myself, it had been five years (and ten years since I first started writing with the goal of being published) and I was beginning to question whether I had done the right thing in giving up my career to follow this path.

I had learned the hard way with my first unpublished novel. Then, I started by approaching publishers individually. This process takes 3 – 6 months or sometimes longer to get a response. You must follow the publisher’s guidelines and typically send a query letter first to see if there is interest in a synopsis and sample chapters. If you get through this process you might be asked to send a complete manuscript with a return self-addressed envelope. My manuscripts came back in the dog-eared, slightly torn, self- addressed envelopes. By the time I realised I should have approached an agent first, I had already been rejected by several publishers. This makes you unappealing to an agent because they cannot go back to that same publisher and the number of available options gets smaller and smaller. Although I had lovely feedback from several agents, I was not able to attract one to represent that novel.

For Into the World, I knew to do things differently. Firstly, unlike my previous novel where I sent out each submission and waited for each one to come back before trying a different publisher or agent (a process that took three years), I had learned that it was acceptable to send out multiple submissions as long as you were open and honest in your query letter. I had this information from a publisher herself. It wasn’t considered rude, it was considered professional. [Interestingly, some agents will only look at your work if it is submitted solely to them, check their guidelines online.]

So I drew up a spreadsheet of all the agents I could find (Australian Literary Agents Association or get a copy of the Australian Writers Marketplace), I picked my top five to begin with, and I sent out letters tailored to the specifications that each agency had asked for. I wrote a simple line explaining that I was making multiple submissions to other literary agents but had not submitted to publishers. I was ready to keep track of my rejections. I was prepared.

The very next day I had an email back from Gaby Naher at The Naher Agency. She was interested, it sounded like just the thing she was looking for, could I send her the complete manuscript? I was in shock. She read it quickly and within three weeks I was signed up! I could not believe it. There was actual jumping up and down on the spot!

From that moment it would be another year before I secured a publishing contract and another year after that to shape and hone the novel further through structural and copyedit processes. I could wax lyrical on how fabulous it was to have professional editors work with me, but that would be a whole other blog post. The short version was that my novel was not yet ready. I worked on changes that my agent suggested, trimmed it to 95 000 words, changed the title, and then she sent if off to six publishers. Again, this is where an agent really shines. They know who to contact in the publishing houses that will be suited to your novel. They have their phone numbers. My eventual publisher said she loved to hear the passion in an agent’s voice as they champion your novel.

They can also speed up the process. In a matter of a few months I had responses from all, delivered in one email, rather like ripping the band-aid off a wound. In one day I had five rejections – small paragraphs of brutal honesty – that set me reeling. But among them, Allen & Unwin saw promise. They offered me an editorial review, a chance to show that I could make the changes necessary to be published.  I had to sit down and get back to work. So I did.