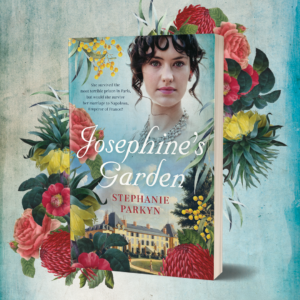 In my writing, I love to bring women’s lives to the forefront, their cares, concerns, needs and desires, because these are often overlooked in the historical record. A major life and death concern for women was pregnancy and childbirth. In Josephine's Garden, I wanted to explore some of these challenges for women alongside the story of the Empress who built a glorious garden and who needed to conceive an heir to keep her place.

When I started to research this novel, all I knew of this famous relationship between Napoleon and Josephine
was that it was supposed to be one of the great tragic love stories. I soon found their relationship to be far more complicated. He is infatuated with her while she is indifferent, he becomes dependent on her while she believes herself to be in love with him no matter what cruelty he inflicts on her. The history books seemed to spend a lot of time speculating on why Napoleon stayed with her, especially after her affair with another man became public, but I was far more interested in her reasons for staying with him. He exhibited many of the traits of abusive, controlling husbands that has relevance to women today. I was interested in the reasons that people stay in relationships or even jobs that are no longer good for them: fear of the unknown, loss of security or money, fear of losing social position or children, and mistaking dependence for love.

"Is Josephine's Garden an historical romance?" When I am asked this I respond: "It's a story about marriage, what do you think?" Marriage in all its messy emotional, possessive, supportive, and unsupportive forms.