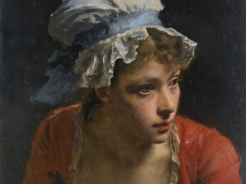 Anyone who has tried writing a synopsis knows how hard it is to distil an entire novel into one page let alone one sentence. Asking what your novel is truly about is one of the hardest questions a writer can ask themselves. For Into the World, I launched into a first draft without knowing the answer. I just wrote. It was based on a true historical story so I had those factual points to guide me. I had a character who went on a journey disguised as a man. But why? Who was she? And what did her journey mean for the reader of today?

I wrote my character Marie-Louise into existence over seven years. I was interested in her bravery, her decision to leave one bad situation for another. I loved that she took this chance to step into the unknown. But it took me a long time to figure out what her goals and desires truly were.

I had so many things that I wanted to say with this novel. I wanted to bring to life the neglected histories of women whose achievements had been overlooked or covered up. I wanted to celebrate this exciting time of great curiosity and exploration of the world, while being aware of the toll European expansion was taking on the cultures of the Pacific. I have always loved natural history, watching David Attenborough documentaries as a child and following a career in biology myself. I loved the diversity of life on earth.  I was drawn to the 18th Century era of Enlightenment, where the process of modern science was beginning to form. I liked the idea of a woman going through her own process of enlightenment, someone learning to think for herself rather than do as she was told.

But the more I read of her life, I began to see her as a damaged person who had suffered and lost so much, not someone who was naturally feisty and gutsy who just wanted to see the world, and definitely not a woman following a man for love. Marie-Louise was searching for something else.

In this story there were so many interesting layers and conflicts. The expedition set sail at the time of the French Revolution expecting to meet ‘savage’ societies on their journey, but unaware that their ‘civilised’ France was consumed in bloodlust and tearing herself apart. On board there were staunch supporters of the King set against the supporters of the new republican government. Even the goals of the expedition were opposing: to carefully chart unknown coasts of Australia and collect new species of plants and animals while urgently looking for a lost explorer in the Pacific Ocean.

Marie-Louise left France at a time when women were not supposed to travel outside the home, but whose rights to equality had been awakened by the Revolution. I found it amazing to read about the women of the French Revolution, I had no idea women were fighting for rights to vote a hundred years before the suffragettes. It made me think we don’t hear enough of our freedom stories.

Gradually I realised Marie-Louise was not on a quest for glory or to be remembered in history as most of the male expeditioners were, instead she was searching for an intangible goal, for independence, for the means to raise her child.

With all these aims and goals swirling around in my mind, writing the synopsis was a nightmare! And I still hadn’t learnt the most important lesson. My novel went through multiple drafts before I sent it out to an agent and then a publisher. Then it went through an editorial report, structural edit and copy edit and I still hadn’t learnt the answer to the question of what my novel was really about.

Only when my publisher wrote the blurb for the back of the book, I finally understood what the core of my novel actually was. It wasn’t about the scientific expedition, or the lost explorer, or any concepts of enlightenment. It was about a mother who gave up her child and would risk everything to return for him.

Find the heart of your novel. That is my tip for understanding what your novel is about. Find the strong human story, the emotional resonance at the core. It will not only help you structure your novel, but help write your synopsis too. And give you that all important answer when someone asks, what is your novel about?

At least that’s what I aim to do next time!